Getting Ready To Wean 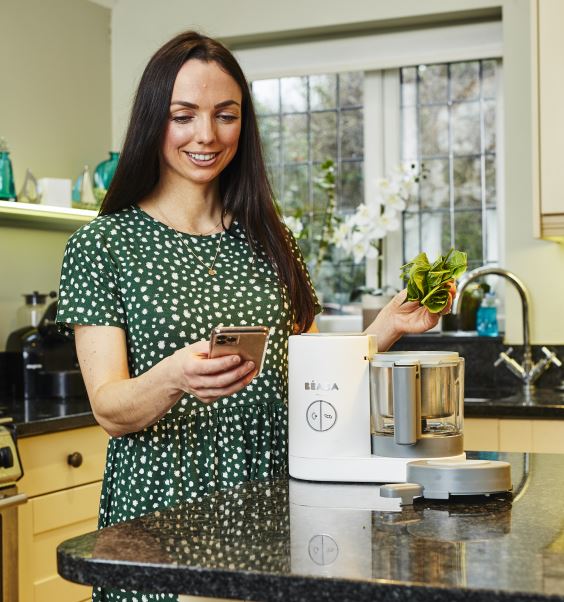 Weaning should be an enjoyable experience however many parents tell us that they often feel confused and don’t know where to start! This is why we’ve teamed up with Nichola Ludlam-Raine (@mummynutrition) to get your questions answered!

Weaning is the gradual introduction of food to a breast milk or infant formula fed baby.⁣ The aim is to expose them to a variety of different tastes and textures.

In the U.K, mothers are encouraged to breastfeed exclusively for their baby’s first six months of life, this is because breast milk can help to protect babies from infections and diseases and it’s also beneficial for the mother too! If mothers cannot breastfeed then other alternatives can be explored, for example using formula milk.⁣

Weaning should start when your baby is around six months old, providing they can hold themselves steady in a high-chair (or for a few seconds when sat on the floor), are able to bring objects to their mouth, and have lost their tongue-thrust reflex i.e. they swallow food rather than spitting it straight back out.

𝙏𝙤𝙥 𝙩𝙞𝙥 👉🏼⁣ To check your baby’s tongue-thrust reflex, place a clean finger or spoon onto your baby’s lower lip; if they re-actively stick their tongue out, then they may not yet ready to be weaned.⁣

During the initial stages of weaning, the main focus should be supporting your baby to become more familiar with food and the idea of eating. Try not to worry too much about how much food they’re eating, as they will still be getting most of their nutrients from milk! ⁣As your baby grows and becomes more familiar with eating though, the proportion of energy from food will naturally become more than that from milk 👍🏼 ⁣

At around 6 months of age, your baby can be given foods such as fruit and vegetables, with most parents offering them as a pureed or mashed consistency. At around 7 months, most babies progress to foods with some lumps, and are having soft finger foods too. Cooked pieces of broccoli, parsnips, peppers and avocado, as well as banana, kiwi and pineapple are great options for your baby’s first food!⁣

Offering green vegetables such as broccoli, kale and spinach are useful to encourage your baby’s bitter and sour taste buds to develop. At this point, your baby’s sweet taste buds are already mature, meaning they will naturally accept fruit more readily.⁣⁣

From 6 months, once babies have been exposed to a range of fruits and vegetables, other foods* can be given such as porridge, mashed potato and crustless toast sticks. Offering soft pieces of slow cooked beef, dark chicken, turkey, fish (with no bones), eggs and lentils is essential too, as they’re rich in protein and iron!⁣ *It’s important to offer new foods in small amounts and one at a time initially in order to spot if your baby is allergic.

🥛 Full fat, unsweetened and pasteurised yogurts can also be offered. Full fat and pasteurised cow’s milk can be used in cooking, on cereal or to mash up food but it shouldn’t be offered as a drink until your baby is 12 months old (continue with breast or formula milk for that). Baby rice can also be useful to thicken purees if they come out too runny.⁣

💦 It’s good practice to offer a small amount of water with a meal from a free-flowing cup to teach your baby how to sip (fill it to around 50ml so the cup isn’t too heavy!). If your baby is under 6 months old the water should be cool-boiled. ⁣

Once a day is sufficient during the initial stages of weaning. However, it’s beneficial to build up to three times a day to mimic your own meal pattern at around 7 months.⁣

By the time babies are around 12 months old, they should be eating at least 3 small portions of healthy family meals plus 2 small snacks such as fruit in between ✅⁣

If foods are rejected, and the bitter vegetables may be rejected (at least initially!), keep offering the food as it may take several attempts for your baby to eat and enjoy it!⁣

If your baby is breastfed, you’ll need to give a daily supplement of vitamin drops containing 8.5 to 10mcg of vitamin D. ⁣

🔎 From the age of six months, they should be given daily vitamin drops containing vitamins A, C and D. ⁣

Formula fed babies only require a supplement if they’re having less than 500ml of formula a day, as it’s already fortified with the nutrients your baby needs. Once your baby starts to have less than 500ml daily formula, you should then start to introduce daily vitamin drops as mentioned above.. ⁣⁣

🖐🏼 These vitamins should be given until children are five years old.⁣

To reduce the risk of choking, do not offer babies whole grapes, hard and small pieces of fruit or vegetables such as raw apple and carrot (these should be grated, initially), round chocolate, whole nuts or popcorn.⁣

❌ 🍯 Babies should not be given honey before the age of 12 months. Although very unlikely, it should be avoided to eliminate the risk of consuming the food poisoning bacteria 𝘣𝘰𝘵𝘶𝘭𝘪𝘴𝘮, which can make your baby extremely ill.⁣

🧂🚫It’s also advisable to not add any sugar or salt to any of your baby’s foods. If you wish to add them to your own portion (if you’re eating the same meal), always remove their portion of food from the pan first!⁣

👉🏼 🍪 Sugary foods such as biscuits and cakes do not offer your baby any beneficial nutrients, and salty foods such as bacon, ham, bread and cheese should also be limited.⁣

Gagging VS Choking in Babies & Toddlers